History of the Clubhouse Movement

In the late 1940s, seven psychiatric patients at Rockland Psychiatric Center in New York State formed a self-help group that met in a hospital “club room”. They formed this group to prepare themselves to be discharged and cope with the challenges of finding shelter and work and dealing with relationships and inevitable relapses. Soon after leaving the hospital, they began to meet on the steps of the New York City Public Library to re-create the “club room” experience, believing that it would sustain their recovery, provide a mutual support system and ultimately lead to changing society’s perception of people living with mental illness. They called their support group “WANA” (We Are Not Alone). 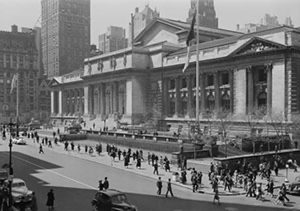 In 1948, with the help of two wealthy volunteers, Elizabeth Schermerhorm and Hetty Richard, and a donation from the National Council of Jewish Women, a building on West 47th Street in New York City was purchased as a “Clubhouse” for WANA. Because it had a small fountain in the backyard, WANA named their new building “Fountain House”. 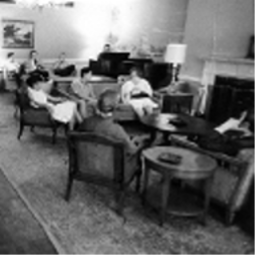 Before he was hired, Beard held unconventional ideas for his time about rehabilitating people suffering from serious mental illness.

Beard had developed a therapy in the back ward of a large, custodial institution of chronically ill patients before the advent of psychotropic medication, based on the premise that therapy should consist of developing relationships responsive to expression of health instead of symptoms of illness (Anderson, as cited in Adkins & Lenyoun, 2004). Hence, Beard began working on algebra problems with a patient who muttered about persecution but indicated an interest in algebra. Beard convinced several employers to hire patients at part-time jobs, with Beard himself training the patients, working with them some of the time, and taking responsibility for meeting performance standards. Beard found that as involvement in these activities continued, symptoms of illness diminished and behaviors expressing health and normalcy were augmented. (Adkins & Lenyoun, 2004, p. 22)

Beard’s approach, though unconventional to the medical establishment of the time, was a perfect fit for Fountain House. It energized its members and gave the Clubhouse direction. Beard turned Fountain House from what was essentially a social club into a truly comprehensive psychiatric rehabilitation facility — setting the foundation for the model of the Clubhouse Movement (Beard, Propst, & Malamud, 1982).

He opened the building [Fountain House] during the daytime, and invited members in to help him clean, paint, and fix up the various rooms in the Clubhouse building. He involved other members by engaging their assistance in helping a secretary, who had previously worked by herself, with various clerical operations. With a number of people now spending the whole day at Fountain House, Beard hired a staff worker who began engaging members in preparing and serving lunch for those at the club. Other work activities that grew naturally out of the needs of the club were soon started. A design was soon established by which members joined with staff to help accomplish the work generated by the needs of their Clubhouse. Through participation, members helped themselves by helping the Clubhouse. The cooperation ensuing from working together and the appreciation expressed by those who benefited from that work, built relationships where members experienced themselves as valued contributors. By experiencing themselves as wanted, needed, and appreciated, the environment at Fountain House enabled members to help themselves by gaining a transformed self-image. (Adkins & Lenyoun, 2004, p. 22)

Beard blocked a movement within the membership for a hierarchy amongst members, whereby some would have decision-making power over others. He instilled the following principles of equality into the Clubhouse Movement: admitting all persons living with a mental illness to membership; and all members having equal opportunities and an equal say in how things are run within their Clubhouse. 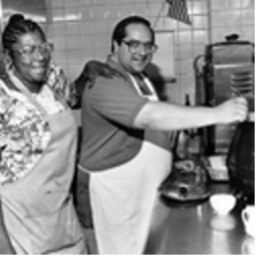 In 1977, Fountain House received a multi-year grant from the National Institute of Mental Health (NIMH) to establish a training program to disseminate its cost-effective and successful model across the U.S. Photo from Clubhouse International

In 1980, Rudyard Propst was hired as the Director of Education and Training at Fountain House. During his tenure he fully integrated members into staff training programs (Glickman, ca. 2013). This change and Propst’s influence paved the way for the full integration of members in the drafting and decision-making process that formed the International Standards for Clubhouses Programs in 1989. Since then, international members and staff have shared decision-making power for amendments to the Standards. Current Standards can be viewed here.

John Beard and Rudyard Propst were prominent early pioneers and visionaries of the Clubhouse movement. They had what might be called an obsession with forming a Clubhouse community that would be based on radical equality (Vorspan, 2005). They pressed the growing Clubhouse movement, against resistance at times, to uphold an unequivocal equality between members and between staff and members. Beard once said that the future of Clubhouses depended on whether members would be allowed to share crucial functions [with staff] and not just routine ones (Glickman, ca. 2013).

For nearly thirty years, the Fountain House program was unique in its way of working, distinguishing itself from other mental health programs by its insistence that members and staff work together, side-by-side, as peers and partners in every function of the Clubhouse operation. In contrast, the mental health establishment continued to base mental health programs on the medical model, which casts people into the role of patient and makes it difficult for them to view themselves as whole human beings who are more than simply “mentally ill.”

The Fountain House program formed the template for what became the evidence-based Clubhouse Model of Psychosocial Rehabilitation and Recovery. Today there are over 320 local Clubhouses around the world.

Glickman, M. (ca. 2014). Integration: Its Evolution in the History of the Clubhouse Movement.